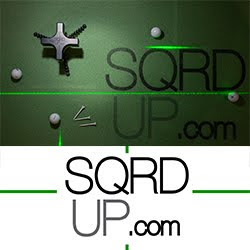 Overview: We would like to remind everyone that we actually tested the SQRDUP "Prototype" a few years back and loved the product. Our feedback for improvement to the SQRDUP Team was:
- The tripod was a bit tricky to get set quickly - They addressed this and greatly improved it!
- The lasers were somewhat "dull" in bright light - Huge improvement on this final version!
We are extremely excited to put this multi-functional Laser Alignment Aid through the test!
More on this in a minute. 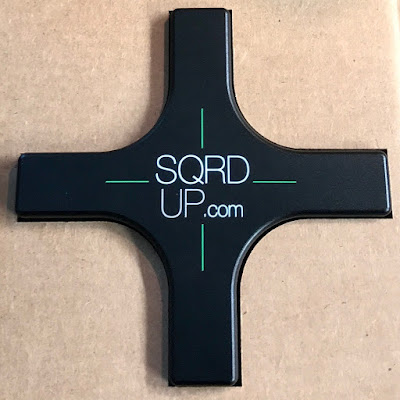 SQRDUP States: This Instructional Golf Laser Improves Alignment, Accuracy and Ball Position Memory Instantly. SQRDUP will assist you in becoming a Better Golfer. From putter to irons to driver,  SQRDUP is the ONLY golf alignment aid which teaches precision using lasers to help create the perfect lines. SQRDUP is especially effective on the putting green, where it provides a fixed putting line which can be easily tracked by your eyes and understood by golfers at all levels. SQRDUP works on any putt, anywhere and anytime! Putting is just the beginning though.
To see SQRDUP in action on the range click on this video link: www.youtube.com/watch?v=S4XRBVKXOhY 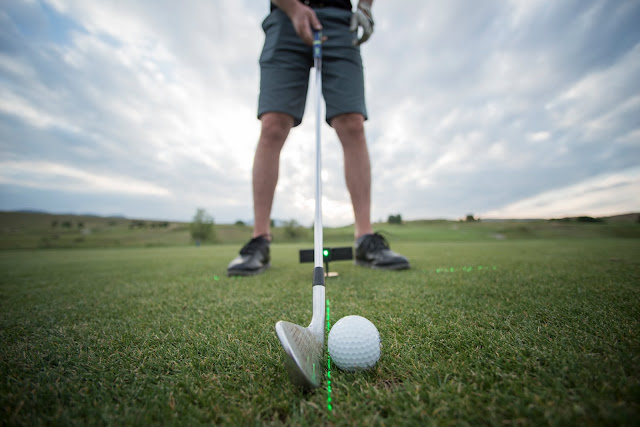 What We want you to know about SQRDUP: SQRDUP is being used worldwide by teaching pros, Professional golfers at all levels and amateur golfers in numerous ways. SQRDUP took all the feedback from the "Prototype" and delivered a product based on what everyone said. The "Go To Market" product is in our opinion as close to flawless as it gets. We are ready to reveal our uses of SQRDUP and why everyone should put one in their bag! First, we applaud SQRDUP for receiving GOLF DIGEST's Editors' Choice Award for Best Golf Training Aid in 2019. 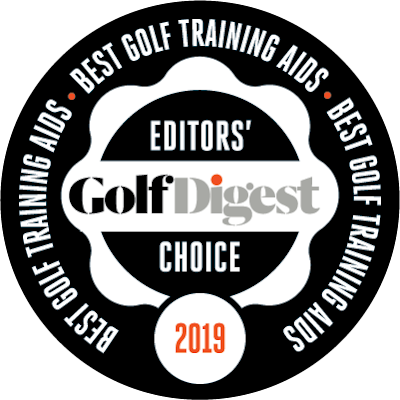 Go Time Golf Testing Session: We started our testing on the putting green. We found a 10 foot putt with a cup of right to left break in it. We then aligned the laser on the exact path that the putt needed to start on and hit 10 putts. I am a straight back and through putter so if my putter didn't stay on the laser it provided instant feedback. I did stop my putting stroke a few times because the laser told me it was not a good takeaway. I rolled in 9 of the 10 putts and saw the extreme value of SQRDUP!
Next we picked a "random" golfer on the putting green who wanted to know what we were doing. This golfer hit a few practice putts and then took our "10 putt challenge". He made all 10 of his 10 foot putts after just a few minutes of practice time. One of the findings was I thought I was lined up "square" to the ball while putting but found that when I looked at laser line and my feet I was actually closed to the target line of the putt. After hitting a number of putts a "square" stance became routine and felt normal. There are just so many benefits to SQRDUP on the putting green. 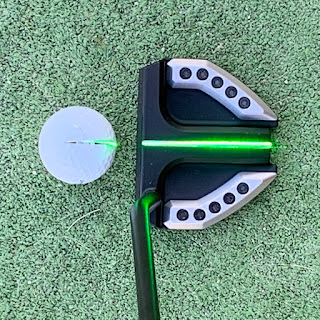 SQRDUP on The Range: Well, well, well more great alignment feedback from SQRDUP. First up some 75 yard wedges. We aligned SQRDUP at the flag, then put a ball on the laser line, aligned our stance to be square with the target, and found the proper ball placement for a "normal" trajectory shot.
Wow, birdie after birdie opportunities with that 58 degree wedge! However, I did notice that my divots were NOT in front of the laser line that the ball was on. I made a few minor adjustments with my swing and focused on getting that divot in front of the line. Next thing I notice I am compressing the ball much better and gained about 6-8 yards with this wedge. Lets test this out with mid irons now! Much to my surprise more of the same except a few more yards gained with my 5-7 irons. I saw gains of 8-12 yards with them. We found a ton of other benefits of SQRDUP during our testing. Want to hit a draw or fade? Simply open or close you stance slightly to the perfect laser lines from SQRDUP. I typically use set up sticks for this but must say that SQRDUP takes ALL the guess work out of alignment perfection. Also it is extremely easy to see changes in ball position for a high, mid or low shot with SQRDUP. We believe that the uses of SQRDUP may be endless as we just kept finding more applications with it!
One of our testers took it to hit pitch shots from a hill over a bunker. He set it up so the laser hit a spot on the green where he wanted to land the ball. His feedback was the tripod allowed him to set the laser quickly and held it's awkward position very well resulting in dialing in the perfect pitch to where he needed the ball to land.
Then he stepped in the trap with it and set the laser 1-2" inches behind the ball, had the club enter on laser line and started hitting some very creative bunker shots immediately. SQRDUP does it again! 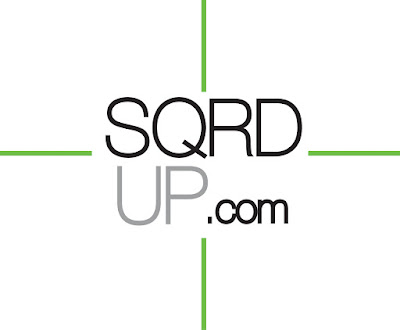 Pros: SQRDUP is the #1 Laser Alignment Aid in our opinion. Whether you use it for putting, chipping,  bunker shots, iron play, driver practice or the many other applications you discover with it, SQRDUP needs to be in your bag. A great value for the price - even better with current promo they are running!

Cons: Only available on line currently. It will take a few days to get it - but there is free shipping with their current promo.

Go Time Factor: This is rather obvious - It's Go Time for SQRDUP. Get yours ordered today, save and start taking your game to a new level using SQRDUP's Laser Alignment Aid!